HomeBlog Why I Advocate – Part 2 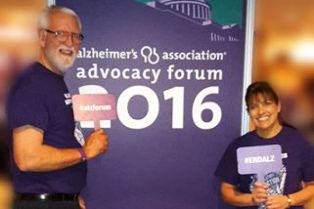 Sundowning is a term given to those with Alzheimer’s who exhibit an increase in agitation and restlessness in the afternoon.  It has something to do with our circadian rhythm and everything to do with increased confusion.  My responsibility after school was to start the dinner that my mother had usually prepared in advance.  In addition, I was to set the dinner table.  My grandmother slept a great deal during the early part of the day. I am guessing out of boredom from staring at the sitter, but also because she was up at night.  Mixing up days and nights is another symptom of this disease.  Her bedroom was in the back of our small one story ranch home and usually her bedroom door was closed.  Without fail, every afternoon she would hear me in the kitchen getting out the silverware and plates to set the table.  She would come charging down the hallway entering into the kitchen to take over.  After all, this room had been the purpose of her entire life.

Grandma never knew who I was from the day we picked her up in Miami and moved her in with us.  She treated me as a helper.  I had the benefit of being able to “work” alongside of her without her getting hostile.  Unfortunately for Pops and my mother Alzheimer’s did not provide them the same treatment.  Grandma was never nice to either of them.  She became combative and struck out at my grandfather with a cane, umbrella or any other nearby object.  Pops was more physically frail than grandma so it was not easy for him to get out of her way. They say the eyes are the windows to the soul; the    disease diminished the sparkle that was a trademark of my grandfather’s personality. He was not equipped to understand what was happening to her and even if he had been, it was too gut-wrenching for him to observe.

This daily afternoon routine in the kitchen became a bit taxing.  When grandma was done setting the table, there was was not one single dish in the cupboards or utensil in the drawer.  Every piece of dinnerware was on the kitchen table.  When there was nothing more she could do, she retreated back into her bedroom until she heard the voices of my parents arriving home from work.  My father’s responsibilities at work were very stressful.  For as kind as he was, his patience wore thin after a long day at the office.  Phase two of my afternoon was to try to keep him calm so as not to add any more stress to my mom who would soon end her work day only to be confronted by her less than loving and very confused mother.  I therefore would quietly place each individual dish and utensil that did not belong at the dinner table back into its proper place.  It was not an easy task to keep from clanking and banging.  The one thing dementia did not take from my grandmother was her hearing. Slow and steady was definitely the key or else she would return to the dinner table triggered by this familiar noise of memories of her past domestic work.  When my parents would arrive home, they were none the wiser that chaos has recently ensued.

Within less than a year, Grandma’s behaviors worsened. She left the house many times and would not return. My mom would chase her down our rural roads without sidewalks trying to rationalize with her to turn around. She was always going to walk “home”.  The police would be called. They would find my mom and grandma walking and somehow manage to return them safely.  Grandma became more paranoid.  One day it was discovered that she had stockpiled knives under her bed pillow.   Shortly thereafter she was moved into a nearby nursing home.  Pops’ heart was broken.

Grandma’s behavior didn’t improve greatly after moving to the nursing home. Mom would get calls from the nurses when grandma hit other residents.  I did notice though that the structure and routine of being in a setting that was created for someone with memory loss provided her more moments of calm. She still did not know me as her granddaughter but,  when we would visit she was a great deal friendlier to my mom and grandfather.  She enjoyed sitting with us to have the best conversation she could while looking at photos.  Regardless of how good the visits were, Pops would always leave with tears in his eyes.

The experience of coping with Alzheimer’s disease during my adolescence impacted my life forever. You may think it as only a negative impact and for the most part of course you would be correct.  Yet, just as every family is busy and moving in different directions, had Alzheimer’s disease not stopped us, I would have never had been provided the time to know my grandparents at such length.  Pops and I became thick as thieves for the remainder of his years with us and for that, I am grateful.  I would have never become self-aware at that young age of my knack for working with older adults.   Life experience showed me the joy it could create.  It was the basis for my college studies and professional career choices thereafter.

And so, I advocate for those like my grandma who are living with this disease, for their spouses who feel heartbroken and alone, for the adult children who have no one to assist them, validate decisions, and relieve them of the stress that Alzheimer’s creates, and for those younger children who watch their parents and grandparents become a stranger to them.  I advocate so that one day we should have a cure and prevention so that no other family must go through this torturous journey.